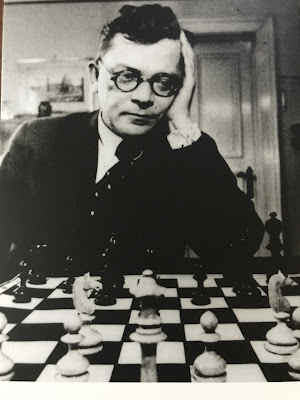 What are the right approach or steps an adult can take to improve chess? How do you know how
anonymous comment

Earlier this week this blog passed 10,000 page views. At the last count TADOC has had visitors from 65 different countries. That's from Algeria to Vietnam in alphabetical order.

I thought it was about time, I wrote something about me, what I’m doing and where my thinking about chess improvement comes from.

I learned chess when I was 6 or 7 but I didn’t start playing serious (i.e. grade/rated) chess until I was around 17/18 in 1986. This was after the first half of the third Kasparov - Karpov match was played in London.

For most of the last 35 years I have been what I now consider to be a 'chess hobbyist'. I played around 30 games a year, sometimes a bit more, sometimes a bit fewer. Nearly all in club matches, very rarely in tournaments. I subscribed to magazines. I bought books. Sometimes I even read bits of them.

I won one tournament in my first 25 years as a chess player. This was in September 2000. I was dead lost in every one of the first four rounds but ended up ending winning every one of them. In the last round I grovelled a draw on the White side of a French Exchange against a girl who couldn’t have been more then ten years old.

I only ever seriously tried to improve my chess during one period of my chess career. In the second half of 2011 I played around 70 rated games. Nearly all of them in tournaments. I actively studied the game. The following year my ECF grade went up to 181 - the highest it’s ever been.

Around about 2013 I got involved in chess coaching. At first for Chess in Schools and Communities and then I took on some private work too. I became the London area coordinator for CSC. One of my responsibilities being to monitor the coaches and the lessons given and to arrange training. It was during this period that I really became interested in how people could improve at chess. Not coincidentally, it was also when I came to the conclusion that the vast majority of training material had little or no educational value. Most chess books and DVDs, I came to see, were produced with neither the producers nor the consumers having any interest in how they might be used or how they might assist a keen student get better at the game.

CHESS IMPROVEMENT AS AN ADULT

Aside from that period when I improved my own game and what I learned during my time as a chess coach, I would say the following are the basis of my thinking about chess improvement.

I spent several years working in a residential alcohol rehab;

I began learning the piano at the age 45, moving from a complete beginner to passing grade 4;

Moving into a completely new profession at the age of 49 (and six months);

Professional Studying: In my new job I was required to take an pass exam which required the interpretation and understanding of an extremely thick book of text, facts and figures. I came top in London, 4th in the country (n=1000 or so, I believe).

I mention these things not to boast. I didn’t do anything that anybody else couldn’t do if they had the same time/resources available and put in the same effort.

The funny thing about all these other interests is that in my experience nobody spends time sitting around talking about how they can improve. That’s something that seems to be unique to chess.

It also seems to me these experiences are much more significant in terms of helping me now that I want to improve my chess than what I have picked up in my 35 years in the game. Which strikes me as somewhat curious, to say the least.

THE ABYSMAL DEPTHS OF CHESS

I started this blog as a way to keep my motivation up whilst I was working my way through the Beat the Masters positions. It's developed quite a bit over the past four months.

The comment at the top of this page was the first time anybody responded to what I'd written. The whole blog, I like to think, is my answer to our anonymous friend's question.