BtM 18A: Study the classics 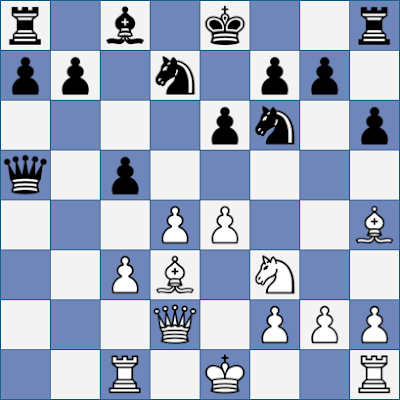 A very good video that, I thought. GM Kraai giving a crystal clear explanation of why studying the classics is much more likely to lead to improved results than rote learning chains of theory.

It’s exactly the sort of thing you wish you’d heard 30 years ago. At least you do if you’re me. Although, to be honest, I’m not sure I’d have listened back then anyway.

So we should study the classics. Great. Which games would those be, then? Where to begin?

The answer to questions like this is always the same:

There are a thousand places to start. Choose any one of them.

Polugaevsky - Tal, USSR Ch. 1969 is as good a place as any. Had I had the game more securely in my mind it might have helped me with today’s position.

Pretty soon I’d whittled down my choice to 1 0-0 or 1 d5.  Eventually I castled, in part because I wasn’t really sure what I had after 1 … exd5, 2 exd5. In fact even this isn’t bad for White - it’s how IM Martin wanted to play it - but the game continuation 2 e5 is clearly another option. I say, "clearly". It didn’t occur to me at the time. Had I remembered the continuation of Polugaevsky - Tal I might have made a different choice with my first move.


More than 50 years ago d4-d5 exd5, e5 was the start of a variation that Polu had prepared as far as 25 e6. An astonishing piece of preparation for those pre-engine assisted times. Your engine will tell you the attack was not as decisive as Polugaevsky believed, but that’s irrelevant to the educational value of the game.

If you’re interested, you can find the pgn on TADOC RAM.